When the Titanic broke apart during the final stages of the sinking, she split in two in the area of the aft First Class Grand Staircase. While involved in the Titanic victim body recovery mission the Anglo American Cable Ship C.S. Minia recovered numerous sections of wreckage that were obviously once a part of the staircase. Newel posts, carved hand railing borders, and even two intact steps from the Grand Staircase were found floating in the open sea and were taken aboard by the sailors working on the Minia. Once plucked from the sea, the crewmen of the Minia set about turning these relics from the great ship into everyday useable objects such as cribbage boards, game tables, nightstands, and picture frames. This section of the Titanic’s aft Grand Staircase, measuring 19 x 2.75, believed to have once been a part of a step or a step back panel was recovered by the Minia and turned by the ship’s carpenter William Parker into a picture frame which he crafted for the Minia’s Chief Officer, James Adams. Incorporated into this unique picture frame were intricate carved balustrade sections from beneath the handrail, cut brass brackets originally part of the decorative brass strip which ran across the entire front of each Grand Staircase step lip, and hardwood lengths such as this example which Parker used for the back of the Adams Titanic picture frame project. For years following the disaster in 1912 and following the tragic death of Adams in a train/vehicle collision this picture frame remained in the family eventually passing into the hands of Gerald T. Mullin, the grandson of James Adams. In the 1990’s the picture frame was publicly displayed as part of a special Titanic exhibition presented by the Vancouver Maritime Museum in Vancouver British Columbia, Canada. In July of 1998 Gerald T. Mullin of Victoria, British Columbia, sold the frame, two document boxes made from Titanic wreck wood, a number plaque from a Titanic stateroom door, and a liquor cabinet made from the wooden wreckage of Titanic’s wheelhouse door. Involved in this transaction was noted Titanic historian and collector Steve Santini. In August of 1998 the picture frame was dismantled by master woodworker William Ricks of Brandon, Manitoba. (See included pictures recording the frame being disassembled).Included with this lot is a signed letter of provenance from noted Titanic collector, researcher, and historian Steve Santini outlining the history of the Parker/Adams picture frame, copies of photographs showing the frame in its original state as displayed at The Vancouver Maritime Museum and during the process of it being disassembled, a copy of the original 1998 artifact release document signed by Gerald T. Mullin and Steve Santini, and photocopies of a Minia crew sign on sheet which Adams signed as well as a photo of James Adams and of the cable ship Minia.

Posted by RR Autograph Auctions on November 30, 2012 in Titanic

A stunning cobalt blue demitasse cup and saucer designated for the Titanic. This is an extremely rare set believed to have been destined for the first class a la carte restaurant on-board Titanic. Both the bottom of the saucer is labeled “Stonier & Co. Liverpool, Spode Copeland’s China, England, R4332, Rd No. 580303, White Star Line, ” and bottom of cup is labeled “Rd No. 580303, Spode Copeland’s China, England, White Star Line.”

This pattern is arguably the most opulent design ever featured on any White Star Line china. Similar china bearing the identical registration number was recovered from Titanic’s wreck site in 1987. (See p. 99 Titanic: The Exhibition (Lithograph Publishing Company, 1997). Although the general practice was for china to be interchangeable amongst White Star Line ships, the exquisite pattern of these pieces, coupled with the fact that very few similar pieces have surfaced, suggests that that this pattern was reserved for exclusive use on Titanic, possibly in the a la carte restaurant or VIP service. Clearly if it had been used on Titanic’s sister ship Olympic, many more pieces would have surfaced given Olympic’s long career. A similar, yet less opulent and more common pattern of china was assigned Registration No. 4331 and may have been used as limited service aboard Olympic.

The few pieces of this pattern to have come to market have been attributed to presentation pieces (ref. Southampton maritime Museum, Southampton, Hampshire, United Kingdom) or to pieces either from, or destined for use, on Titanic. What is amazing here is that rather than just the saucer or cup, this lot consists of the demitasse cup and saucer set. The interlocking letters “OSNC” on the saucer stand for Oceanic Steam Navigation Company, White Star Line’s parent company.

White Star Line was known for its luxurious appointments on board its ships. This china represents the best of the best. The unusually exquisite cobalt blue color is so richly blue it practically leaps from the pattern. Imagine the look on the faces of those who see it when they learn it was produced for Titanic herself, and not the film! This set could easily become the pinnacle of any collection of shipboard table ware, bar none.

Posted by RR Autograph Auctions on November 30, 2012 in Titanic 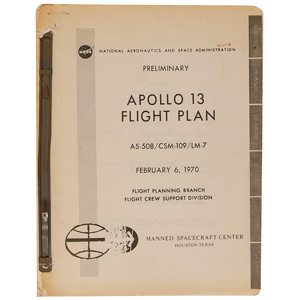 Printed and bound preliminary Apollo 13 Flight Plan, “AS-508/CSM-109/LM-7,” dated February 6, 1970, measuring 8.5 x 11, and providing a minute-by-minute time frame for the entire mission, including the test of the lunar module. First page is a copy of the flight plan submission bearing copies of signatures of T. R. Lindsey, Warren J. North, and Deke Slayton. In very good condition, with scattered toning and soiling, a few small edge tears, and expected handling wear. Plan originates from noted test pilot Robert Rahn, who was employed by North American Rockwell, which was making the command module. He used his expertise to determine how the astronauts would want the controls, displays, and equipment configured in the capsule. When Columbia, Apollo 11’s CM, was completed, he was assigned to help that crew of astronauts become familiar with it. It was also Rahn who appeared on live television on ABC at the beginning of the Apollo 13 emergency, correcting several sensational inaccuracies originally reported. Accompanied by a hardcover copy of Rahn’s memoir, Tempting Fate. RRAuction COA.

Posted by RR Autograph Auctions on November 29, 2012 in Apollo 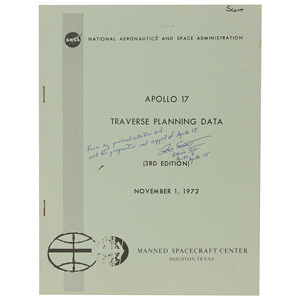 Posted by RR Autograph Auctions on November 29, 2012 in Apollo

Large, flown Target of Opportunity (TOO) Map, carried on board Apollo 9 in 1969. This second edition map measures 39.5 x 10 and is labeled in the lower right, “Targets of Opportunity Earth Flight Chart (AET) Apollo 9 Mission.” This map shows the 10 principal areas of photography for the EOS65 Multispectral Terrain Photography Experiment, the one formal scientific experiment aboard the mission. As a photographic dress rehearsal for Landsat, this critical and highly successful experiment provided the global scientific community the first simultaneous satellite photography of the earth’s surface. The photography consisted of 372 photographs of identical surface locations as indicated on the TOO map, taken simultaneously by a four-camera Hasselblad assembly mounted in the Apollo spacecraft window. Map is signed in green felt tip, “Flown aboard Apollo 9, Jim McDivitt CDR.” Accompanied by a certificate of authenticity from McDivitt which states “I certify that this Target of Opportunity map was flown onboard Apollo 9 on her flight from March 3-13, 1969.” In fine condition, with several vertical storage folds. Rare and one-of-a-kind. Pre-certified Steve Zarelli and RR Auction COA.

A printed Apollo 15 Change B Lunar Surface Checklist, dated July 14, 1971, bound by two rings, measuring 8.5 x 11, “Prepared by EVA Procedures Section, EVA/IVA Procedures Branch, Crew Procedures Division.” Manual provides step-by-step instructions for preparation and procedures for all three Apollo 15 EVAs. Contents include post and prep activities, all three moon walks, as well as emergency lift-off. Featured inside under the “EVA-1” tab is an almost exact duplicate of the checklist worn by Dave Scott over his glove while performing his first moon walk, which is offered as item #510 in this auction. In fine condition, with expected light handling wear. RRAuction COA.

Final Apollo 15 Lunar Surface Television Operations Plan, 8 x 10.5, 57 pages, July 5, 1971. Document prepared by the Apollo Communication Systems Section of the Manned Spacecraft Center, including procedures, instructions for camera use, and timelines for television operations once on the lunar surface. In very good condition, with scattered creases, toning, and soiling to the covers, a couple small areas of trivial surface loss, a rusty binding staple to the upper left, and five punch holes to the left border. RRAuction COA.

Apollo 15 Lunar Module Range/Rate Indicator gauge, mounted in clear Lucite, measuring approximately 4 x 5 x 6, and weighing 3.75 pounds. This unique gauge was removed from the M-6 test vehicle, a full-scale mock-up of the Lunar Module interior as the result of the Apollo 15 LM crew finding the outer pane of glass on the Lunar Module Falcon Range/Rate Indicator gauge broken. This unit was similarly broken during the Apollo 15 flight for flammability testing to see if the presence of oxygen in the electrical circuitry of this gauge posed any fire risk to the Lunar Module Falcon. The Flammability Test Report concluded ‘the presence of oxygen in the unit created no flammability constraint to the continuation of the Apollo 15 mission.’ Signed on the Plexiglas cover of the gauge in silver ink, “Dave Scott, Apollo 15 CDR, Falcon Endeavor.” In very good condition, with cracked and chipped outer pane and expected scorching and distress from testing. Accompanied by seven color NASA ‘red-numbered’ photos of the gauge in various stages of the test, a certificate of authenticity from Novaspace for Scott’s signature, and a CD with 47 images of the gauge, Scott signing the gauge, and the NASA testing report. A unique piece of equipment and documentation. Provenance: Goldberg Auction 2008. Pre-certified Steve Zarelli and RR Auction COA.

Posted by RR Autograph Auctions on November 27, 2012 in Apollo

Flown aluminum ‘lunar rover license’ plate, 1.25 x .5, marked with the registration number “LRV 001”, with “MOON” as the home state, the year 1971, and the NASA and Boeing logos in the corners. Astronaut Dave Scott carried them in his space suit knee pocket on all three lunar EVAs, including on the lunar rover. Accompanied by a letter of authenticity from Dave Scott, stating, in part: “I hereby certify that the miniature ‘LRV-001’ license plate included with this letter is from my personal collection and was carried in the pocket of my A7L-B spacesuit during Apollo 15…To commemorate the first use of the Lunar Roving Vehicle (LRV), the first vehicle to be driven on another world, I designed and had produced this small license plate for use as a memento of our lunar expedition. I carried this license plate in a pocket of my Apollo A7L-B EVA spacesuit (as shown in the above photo) during our nearly three-day stay on the Moon as we drove 27.76 km across the lunar surface.” In fine condition, with a few trivial surface marks.

This plate, one of only an estimated 15 total, were prepackaged in a pack smaller than a pack of gum, which was stowed in the left knee pocket of Scott’s space suit before the launch and remained there until after his return to Earth. They were in space for 12 days, 7 hours from launch to splashdown. More importantly, they spent nearly 67 hours on the moon, including 18h 30m of EVAs, and were carried on LRV itself for around 17 miles across the lunar surface. RRAuction COA.

Posted by RR Autograph Auctions on November 27, 2012 in Apollo

Aldrin’s honorary doctorate degree presented to him by Clark University in Worcester, Massachusetts, on May 19, 1969, just one month before the Apollo 11 landing, on the occasion of the grand opening of the Goddard Library. Aldrin’s father studied under Goddard at Clark. Degree measures 11 x 14 and was presented to Aldrin as a “Doctor of Science, Honoris Causa” it comes in the original presentation folder and is accompanied by its three-page printed proclamation. RRAuction COA.

Posted by RR Autograph Auctions on November 26, 2012 in Buzz Aldrin