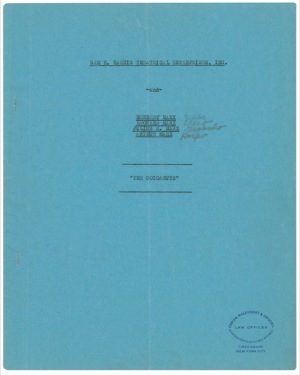 DS, signed with their legal names, “Leo Marx,” “Arthur Marx,” “Herbert Marx,” and “Julius H. Marx,” six pages, 9 x 11.25, September 23, 1927. A remarkable agreement between the Marx Brothers and their management company, Sam. H. Harris Theatrical Enterprises, Inc. regarding the theatrical production of ‘The Cocoanuts,’ in which the parties desire “to extend the period of this agreement for an additional theatrical season…of 1927–1928…and to continue for and during the life of the dramatico-musical season. That in lieu of the compensation provided for in the aforesaid agreement dated the 5th day of December, 1924, the Manager agrees to pay to the Marx Brothers and the Marx Brothers agree to accept the sum equivalent to fifteen perfect (15%) of the gross weekly box office receipts derived from the performance and representation of…’The Cocoanuts,’ accompanied by true and accurate statements showing the receipts of every performance given by said Marx Brothers” and “an amount equivalent to fifty percent (50%) of the net profits derived from the business of performing and representing…’The Cocoanuts’ with the Marx Brothers rendering services in said play for and during the period of the theatrical season of 1927–1928…It is agreed that the compensation of the Marx Brothers, pursuant to this agreement, shall be subject to no minimum guarantee, and that in the event of Herbert Marx refusing to comply with this agreement, the compensation to be paid to the remaining Marx Brothers shall be reduced by $250.00, and, also, in the event of any of the other Marx Brothers shall be reduced by one-third of the difference between their compensation, as herein provided, and the sum of $250.00.” Contract is housed in the original blue legal folder. In fine condition, with a light central vertical fold, passing through the first letters of each signature, light creasing, and a pencil notation of their stage names on the front cover of the folder.

The Cocoanuts was an Irving Berlin musical written for the Marx Brothers following the Broadway success of their I’ll Say She Is. It takes place during the Florida land boom, with Groucho (Julius Marx) as the quintessential con-man assisted by Chico (Leo Marx), Harpo (Arthur Marx) and Zeppo (Herbert Marx). The Broadway run opened in 1925 at the Lyric Theater, after which the brothers took the show on tour during the summer of 1926. The musical closed in August, after which they signed this contract. A brief Broadway revival played at the Century Theater in May of 1927. In 1929, Paramount Pictures made The Cocoanuts into the Marx Brothers’ first film.

Negotiations didn’t always go smoothly between producer Sam Harris and the Marx brothers. Before The Cocoanuts opened on Broadway, Harris went into their dressing room for a discussion; a few minutes later, his clothes were thrown out the door, and Harris then emerged stark naked. “I guess you better handle it,” he said to the directors. A fantastic document pertaining to the show that would make the quartet national stars, signed with their seldom-seen real names. Pre-certified PSA/DNA and RR Auction COA.

Posted by RR Autograph Auctions on March 6, 2012 in Marx Brothers